The Grinch’s Guide to Christmas Adverts 2017

Look, 2017 has a been a bit of a rough year. Donald Trump. Brexit. North Korea. The fact that pretty much every famous man is an irredeemable monster. It’s been dark. So as we enter the festive season proper, we’re all looking for a bit of warmth and light. And where better to find it than in Christmas adverts, in which shops use stories of Yuletide joy to disguise the fact that they want to sell us stuff?

In an alternate universe, Moz the Monster in the John Lewis Christmas ad is actual human trash fire Morrissey, who terrorises the child with his monstrous behaviour, opinions and prose. It would be much more interesting than this year’s offering, a regulation-issue tale of childhood innocence so painfully on brand that there’s little of interest to say about it. At this point, you are either the sort of person who will adore this advert and cry real tears over it, or you are not a cretin.

It really is a White Christmas for Waitrose this year, with only one non-Caucasian that I could make out in their seasonally-themed bunker cottage waiting out what looks like a nuclear winter (something which, in 2017, is a genuine concern again). I think maybe they tried to disguise the whitewashing somewhat with the black and white cinematography, but it only makes it more alarmingly obvious. It’s certainly a stark contrast to the rest of this year’s adverts, which are encouragingly inclusive and multicultural.

This is eerily reminiscent of the opening sequence from the Nicolas Cage film Lord of War, which follows a bullet on its journey from the production line to being fired from a gun. The songs are even quite similar. Now, I’m not saying that Amazon’s agency took inspiration for their Christmas ad from a brutal satire about the illegal arms trade, but I’m also not not saying that.

A completely unrealistic depiction of how social media works in 2017. How this story would really go down: exactly one half of Twitter unironically ships for the shoe couple; exactly one half of Twitter hounds the girl with sexist abuse for having the audacity to be a living woman in possession of shoes; four thousand think pieces ponderously debate whether or not the shoe is symbolic of patriarchal oppression; the Daily Mail digs up a poor taste, slightly ableist joke in the girl’s Twitter feed, made in 2010 when she was 17 years old; exactly all of Twitter rallies for the girl to lose her job (#thatwillshoeher); she’s fired; we’re all monsters. Merry Christmas.

This throws up far too many challenging questions. Why do bears not wear anything below the waist except for the bear child (cub?) in dungarees? How do the man bear and woman bear breed? How do they eat? And why do they all turn into humans at the end? Are they trying to say that we’re all just stuffed animals? What does that even mean? It might have profound existential implications, but I can’t figure out what they are.

Christmas is a great time of year for musicians, because they can take their most cloying, insipid and melodically uninspired songs, put “Christmas” in the title, and they know it’ll be played 200 times a day on the radio. How else to explain such half-arsed anthems of mediocrity as ‘All I Want For Christmas Is You’ and ‘Merry Xmas Everybody’? At any rate, Sainsbury’s have decided to add to the grand canon of awful Christmas songs with this singalong ditty, a song so bland and forgettable that it barely qualifies as sound at all. 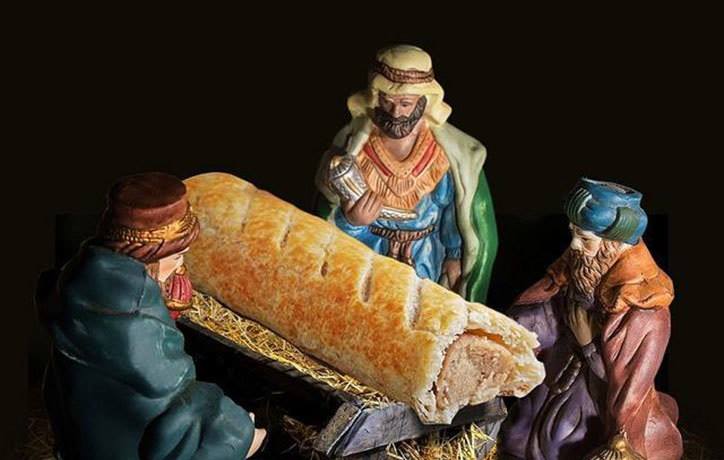 In a brilliantly subversive act of lowkey antagonism, Greggs photoshopped the Nativity scene to replace the baby Jesus with a sausage roll. Needless to say, it caused quite a stir. It even prompted the UK Evangelical Alliance to tell Newsbeat, without apparent irony, that the stunt “does raise issues of companies using the Bible story to sell products.” One could charitably say they have arrived at this particular realisation many hundreds of years too late.

By updating Santa’s workshop to the modern age, this ad makes explicit the horrors of the commercialisation of Christmas. A giant factory, that hallowed temple of late capitalism. A workforce of hundreds of elves, no doubt all on zero hours contracts (here’s a grim fact: when you type “zero hours contract” into Google, the second autofill result is “zero hours contract template”). A never-ending assembly line of mass-produced toys, the unstoppable, unfeeling circulatory system of consumerism ceaselessly feeding our insatiable appetite for more things, more stuff, more anything to fill the empty void within ourselves that in reality just craves even one single meaningful connection with another – wait, what was I talking about?

Let’s imagine there was a job spec for our dear friend marketing automation. It’d probably look something like this.
Read more
1 / 7
We use cookies to enable website functionality, understand the performance of our site, provide social media features, and serve more relevant content to you. We may also place cookies on our and our partners' behalf to help us deliver more targeted ads and assess the performance of these campaigns.
Cookie settingsACCEPT
Manage consent