It’s National Storytelling Week, which has inspired us to look at some of our favourite yarn-spinning campaigns. Whether funny, moving, thought-provoking or inspirational, stories hook us and hold a place in our memories in a way that straightforward promotional messages just aren’t able to.

For the purpose of this article, a storytelling campaign is one that has an ongoing narrative (e.g. not a standalone piece of content), and is usually reinforced across multiple mediums or channels. There are often characters who things happen to, who face a challenge or obstacle, and who the public are asked to empathise with.

Here are some of our favourite stories by brands…

Believe it or not, compare the meerkat has been on our small screens for 10 whole years! It all began with a silly idea based on the concept that some customers searched ‘compare the meerkat’ rather than the comparison website’s brand name, Compare the Market. Aleksandr the meerkat – and his ‘simples’ catchphrase – is now joined by a whole family of meerkats, and the story develops year on year. The hugely successful campaign is backed-up by meerkat soft toys and an entire loyalty scheme: Meerkat Movies and Meerkat Meals. Not bad for a website that compares insurance policies.

This campaign does an amazing job providing a platform for ordinary, real-life stories. It lets the women it’s speaking to do the talking. Rather than present an ‘aspirational’ scenario or world, as ads targeting women historically have done, this campaign was one of the first to show women as they actually are. By portraying the average woman, her insecurities, fears and fallibility around exercise – without judgement – This Girl Can has successfully persuaded nearly three million women to become more active since it first launched in 2015. In subsequent years, social media and brands targeting younger women in particular have moved in a similar direction; with a focus on honest representation and acceptance.

Okay okay, I know I said ‘not a standalone piece of content’, but this video is so damn good, and it’s the epitome of powerful storytelling. It’s impossible to look away. There are characters who are immediately relatable, there’s a story arc, there’s humour, and there’s a strong forward momentum. The actual products being sold aren’t even mentioned, but their functionalities are seamlessly and subtly demonstrated throughout. This is a B2B piece of content the like of which you rarely see. It’s incredibly creative, it has broad appeal, and it’s very entertaining. Fingers crossed for an Underdogs series! 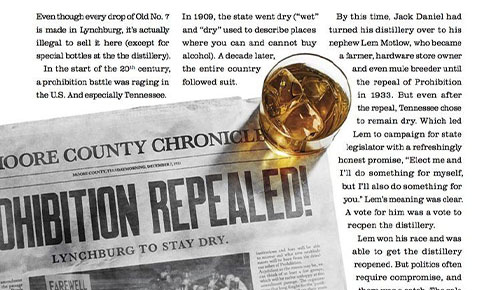 The ‘Postcards from Lynchburg’ campaign was launched in the 1950s. It’s the longest running advertising campaign in history, that now only exists on the London Underground. Jack Daniels is the master of telling its own story. And the whisky company does it in such an original way. Who would have thought that paragraphs of long-form copy would work as tube adverts? Can you imagine being in that meeting? Luckily, someone did buy into the idea, because the modern iteration of the campaign continues to be a resounding success. All Jack Daniel’s advertising is consistent and rooted in the brand’s heritage, history and craftsmanship. To this day, Jack Daniel himself and those who live and work in Lynchburg, Tennessee are at the centre of the stories the company tells.

Whether through copy, video, or multiple pieces of content in a myriad of formats, it’s narrative that holds a great idea together. Humans are wired to love stories and empathise with characters. Why not inject a little storytelling into your B2B marketing strategy?

6 marketing certificates all B2B marketers should probably have

Save & Accept
Powered by