Creating a dating app. For cows

Raising the profile and subscribers to Hectare Agritech’s SellMyLivestock platform

Hectare Agritech is a fast-growing start-up focused on transforming the way farmers buy, sell and pay for their produce. Its SellMyLivestock platform allows users to find and trade breeding animals, such as cattle and sheep, online.

Hectare wanted to talk to farmers, encouraging them to trade livestock online, and in doing so grow subscribers to SellMyLivestock. But it also wanted to show the wider public that, contrary to popular opinion, technology and intelligent data use is crucial to modern farming. Thinking that perhaps goes against traditional ideas around farming and agriculture.

Objectives of the campaign were:

Farms represent an important and extremely diverse part of the UK SME landscape. They’re often family-centric and are under a lot of pressure. So, Hectare wanted to communicate that farming can and should be a profitable business, and to position online livestock trading as a step towards a profitable industry.

"The campaign opened doors for us in strategic locations, such as the US and continental Europe, which we’re continuing to explore and expand on now."

Farmers like a laugh, as long as it’s not at their expense. So we knew, if we pitched it right, a funny and good-natured campaign would go down well.

We developed an app called Tudder, or ‘Tinder for Cows’, as part of a Valentine’s Day-focused media campaign.

The simple dating app for bovine beaus worked like Tinder, with farmers swiping left or right on the profiles of cows and bulls. A match produced an amorous, mooing sound. The chosen profile then led the suitor to SellMyLivestock, where they would find more information on their match.

We wanted to put livestock love on the media agenda. So the app launch was propelled by an extensive and ambitious media strategy that included Valentine’s cards mailed to key journalists, as well as targeted, exclusive briefings with media contacts, and a multifaceted social media campaign.

Our activities were supported by light-hearted and cow-heavy farm and livestock photography (taken in collaboration with real farmers), teaser app stills, and a funny campaign video created on a shoestring.

We put forward farmers who we knew would interview well, and carried out interviews on their farms, in which they addressed serious issues around agriculture, the wellbeing of their peers, and technology usage. The campaign was fun, but there was a serious message behind it. 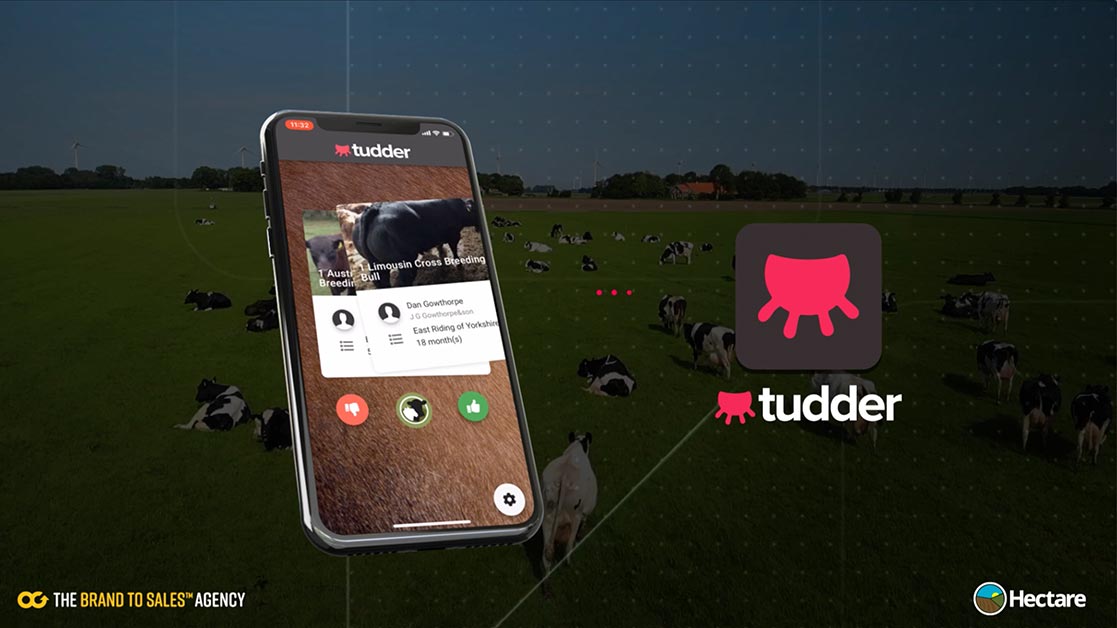 We must have hit the right note with farmers, because Tudder became one of the most successful campaigns of the past few years. A month-long programme of proactive media engagement generated huge awareness, direct engagement with the campaign app, and led to a dramatic increase in subscribers to the SellMyLivestock platform (a 58% increase compared with the previous six months).

The campaign took off. We got the public attention we needed through major outlets ranging from the BBC and The Guardian to Reuters and the New York Post. Alongside widespread coverage on international news channels, including FOX24 News, France 24, CNN, Russia Today, Spanish broadcaster Antena 3 Noticias, and China’s TomoNews.

Tudder also caught the attention of pop-culture broadcasters, particularly in the US, where it featured on James Corden’s The Late Late Show, Late Night with Seth Meyers and Conan. Unherd (sorry) of for a B2B tech campaign. The humour in our campaign was a huge factor in its success, with the media enjoying, and running away with, our a-moo-sing jokes.

Away from the mainstream news ‘punathon’ that followed the launch, the story also resonated with well-respected farming industry titles such as Beef Magazine (US), Farmers Weekly (UK) and RFD-TV (US). News of the platform and the wider messaging around the campaign reached our core farming audience, leading to a huge increase in traffic and sign-ups to SellMyLivestock.

The campaign also brought Hectare to those all-important overseas markets. Contacts were made with investors and potential partners in the UK, US, Brazil, Argentina, Australia, France and New Zealand.

Ultimately, we demonstrated that online livestock trading is a great way to make farms more efficient and profitable, and had a laugh while doing it.

"We were overwhelmed by the results of the Tudder campaign. The incredible media coverage led to an unprecedented increase in new registrations to the SellMyLivestock platform, and put us at the centre of the agritech conversation with both media and investors"

uplift in SellMyLivestock traffic during the coverage

B2B CAMPAIGN OF THE YEAR

BEST USE OF PUBLIC RELATIONS

BEST USE OF PR

TECH AGENCY OF THE YEAR

Brand to Sales in Action 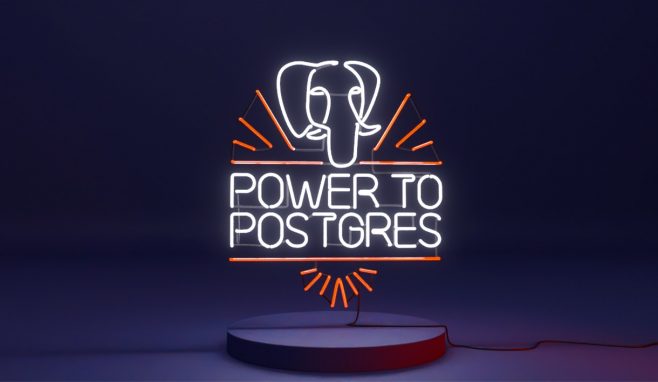 Elephant in the room

Working with a US-based database software business to create a brand to match their purpose, and their market
Read more 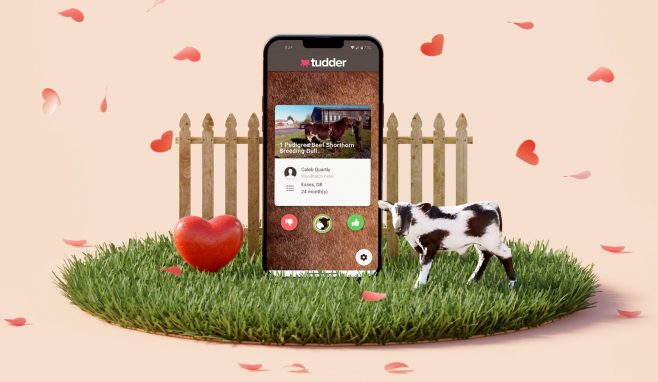 Creating a dating app. For cows 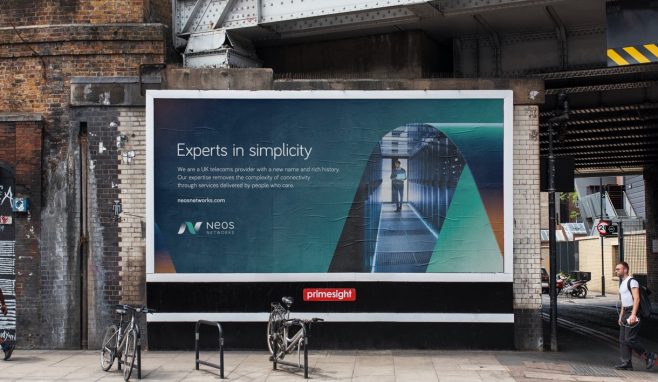 A cross agency project to rebrand, rename and relaunch SSE Enterprise Telecoms as Neos Networks
Read more
1 / 3
We use necessary cookies to enable website functionality, security features and understand the performance of our site. Users have the option to adopt analytical cookies and serve more relevant content to you. We may also offer analytical cookies on our and our partners' behalf to help us deliver more targeted ads and assess the performance of these campaigns.
Cookie settingsACCEPT
Manage consent